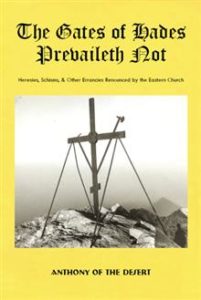 Heresies, Schisms, and other Errancies Renounced by the Eastern Church

[Unfortunately, an error lives in the pages of this book. Anthony accidentally located the Church Father Tertullian’s involvement in Montanism before his entrance into the Eastern Orthodox Church, his participation occurred after he had been an Orthodox Christian. Please accept Anthony’s humble apology.]

The absence by so much of the West of knowledge about the Orthodox Christian Church has been remedied by The Gates of Hades Prevaileth Not. Within its pages dwells discussion on Christology, Trinitrian theology, and more; many of these terrains are raised within the context of councils addressing deviations from Apostolic and Church Father teaching. A comprehensive A-Z digest makes researching the wealth of knowledge in The Gates of Hades convenient and effective.

In a territory such as the United States of America, where Protestantism carries the day, there unfortunately resides miniscule knowledge of Church history – not only by Protestantism’s lay community but also by a plethora of its clergical constituency. It often seems as if the West acknowledges the first century life of the Lord Jesus Christ and His Apostles and then leaps ahead some fifteen hundred years (past what those in the West sometimes reference as the “dark ages”) to the Protestant reformation when, according to Protestants, Martin Luther resurrected Christianity. Rarely does any consciousness of the Church Fathers, councils, the unbroken chain of apostolic succession, and other integral components of the Church established by the Lord Jesus Christ dwell in the western mind. That is to say that all too often when Protestants are confronted with references to saints of the Church (St. Athanasius, St. John Chrysostom, St. Basil the Great, et al.), councils (both Ecumenical and regional, as well as those by individual Church Fathers), heresies (Arianism, Monophysitism, et al.), and other components of the early Church life with alarming frequency their response is but a blank stare.

The Gates of Hades Prevaileth Not intends to remedy this tragic deficiency by visiting heresies and schisms, which is to construct a portrait of the early Church by which Protestants can then develop awareness of the pillar and ground of the truth. Such a template of how the Holy Eastern Orthodox Church has soundly defeated infernal errancies will then enable the West to witness the enterprises of Church Fathers and will thusly facilitate their acquaintance with Church history as well as with the councils, decrees, and other elements of our Holy Orthodox Church. And not only will this equip western minds with a sound comprehension of the Church’s post-first century life, it will turn the blank stares by Protestants (when confronted with commentary on the early Church) into knowledgeable smiles; thus, watchfulness against straying into similar errancies will accrue. For instance, when examining apostolic canons (teachings by the Apostles in the first century), and their demand that only wine mixed with water be used for the Lord Jesus Christ’s Blood during Divine Liturgy, there will ensue a more complete understanding of the abominable nature of Protestantism’s widespread development of employing grape juice in their Communion services. Or consider the modern West’s pervasive proffering of a future (post-tribulation) literal thousand year reign of Christ Jesus and the early Church’s repudiation of this millennialist (or chiliast) errancy.

Consequently, The Gates of Hades Prevaileth Not humbly endeavors to restrain the West from previously disavowed, defeated deviances via an apprenticeship in the history of our Holy Eastern Orthodox Church.

Prior to embarking upon our voyage through Church history please bear through a few technical matters. While a bibliography will issue in the addenda it should now be mentioned that the predominant authority for intelligence on Church Fathers, councils, heresies, etc. in The Gates of Hades Prevaileth Not will be The Rudder (or The Pedalion), a compilation of Church canons by St. Nicodemus and St. Agapius (published in 1957 by the Orthodox Christian Education Society). Moreover, insofar as the scriptural citations herein, the Orthodox Study Bible (published in 2008 by the St. Athanasius Academy of Orthodox Theology) functions as the sole expounder.

Now, without further ado, let us set sail upon our journey across the vast and endless sea of Holy Orthodoxy.

The Gates of Hades Prevaileth Not rehabilitates the vacancy of human knowledge about the Church established by the Lord Jesus Christ when diagraming heresies and schisms defeated by the early Church. For instance, the fourth century hretic Arius proclaimed that there was a time when Christ was not (i.e., the Son of God as a created being) and this resulted in the calling of a council in 325 in Nicea where what has come to be known as the Nicene Creed (the Symbol of Faith) issued as a means by which to clearly define the Orthodox Church’s belief on the nature of Christ.

There was also the fifth century Monophysite heresy wherein there existed the claim that the Lord Jesus Christ possessed only one nature (the divine absent the human). The Fourth Ecumenical Council (held in 451 in Chalcedon) averred the Orthodox belief that the Lord had two natures (divine and human) in one Person. In this manner the Orthodox Church defeated heresies and errected its definition of the Faith, and it is in thoroughly examining these heresies that our Holy Orthodox Church’s councils conquered that The Gates of Hades reveals correct theology.

The same is true when scrutiny of other heresies is undertaken, such as the Nestorian denial of the Theotokos (the Mother of God), the Pneumatomachi denial of the Holy Spirit’s divinity, and so on. Moreover, the Protestant misconception of Christ and His disciples in the first century and then a fifteen hundred year “dark age” until Martin Luther came to rescue/resurrect the Church has, in The Gates of Hades, been rebutted by not only discussing in great detail Church Fathers and councils, but also by the concommitant illumination of an unbroken line of apostolic succession.

In establishing what the Church has believed everywhere, by all persons, always, The Gates of Hades also exposes the many Western departures from what Christ taught the Apostles; such as, the Protestant use of grape juice for the Blood of Jesus Christ, a single immersion for “baptism” (along with the abandonment of Chrismation), etc.

Finally, the unique digest must be mentioned due to its facilitation of easy research and enhancement of learning. Assuredly, The Gates of Hades is an indispensible guide to Church history and theology.

A huge controversy erupted in the fourth century over heretical claims by Arius, who was born in Libya c. 250 and was ordained as a presbyter by Alexander (Bishop of Alexandria from 311-326). Around 318 Arius proposed that Jesus Christ (the Son) had a beginning, or was bom in time, which was to say that there was a time when He was not. In other words, according to the heretic Arius, the Son of God was a created being. This teaching, known as Arianism, was a by-product of errant Paulinist pretenses; fallacies in the mid-third century by Paul of Samosata that contended there existed no separate Jesus Christ or Holy Spirit (Paul proclaimed that the Son did not come down from heaven and that Christ Jesus was a mere man). As a consequence of his specious teaching Arius was condemned and exiled by Bishop of Alexandria Alexander before then having been excommunicated c. 321.

In 324 the conflict over Arianism became so disruptive that Constantine (the emperor from 306-337) sent letters to Arius and Bishop Alexander in an attempt to quell the difficulty, however, this effort failed and a council in 325 at Antioch was convoked. At this council the majority condemned Arius’ heretical teachings and a synodial letter was issued to denounce the view that Jesus Christ was a created being (that there was a time when He was not).

Unfortunately, 325 Antioch failed to deter Arianism and Emperor Constantine called another council in 325, this one was held in Nicaea (325 Nicaea was the First Ecumenical Council). This council deposed Arius and issued the Nicene Creed to oppose Arianism and establish a statement of faith. Arius then swore to follow the Nicene Creed, and to believe as the Church believed (e.g., that Jesus Christ is eternal God), so he was reinstated as a presbyter after 325 Nicaea, however, c. 327 he ascribed to the heresy that the functions in Christ Jesus’ soul came from only His divine nature. In fact, at that time Arius also adopted the Anomean heresy that the Father and the Son were unalike, which was to profess that Jesus Christ was less than God; a fallacy in which he persisted until his death c. 336.

325 Nicaea and the issuance of the Nicene Creed served to somewhat restrain Arianism but the heretical beliefs of Arius – that the Son was a created being, the functions of Christ’s soul resulted from only His divine nature, and the Son was unlike the Father – experienced widespread support. For instance, pro-Arian Eusebius of Nicomedia acted to have three influential anti-Arian bishops deposed; Eustace (the Bishop of Antioch) in 326, Athanasius (the Bishop of Alexandria) in 335, and Marcellus (the Bishop of Ancyra) in 336. Then Emperor Constantine died in 337 and his son, pro-Arian Constantius (the emperor from 337-361), took over as emperor…the Arian controversy was rekindled.

The ensuant conflict resulted in two major councils in 347. The first was the 347 Council at Sardica (in what is now Sofia, Bulgaria), which initially intended to include both Easterners and Westerners, but the Easterners ended up refusing to attend so Westerners proceeded without them. 347 Sardica issued the Tome of the Westerners, a pronouncement that confirmed the faith of the Nicene Creed and anathematized any contrary belief. The second council was the 347 Creed of the Longlines and it served as the Easterners’ counterpart to the Westerners’ 347 Sardica. 347 Longlines condemned the Arian propositions that there was a time when the Son was not and that prior to His incarnation He possessed no distinction from the Father. 347 Longlines also confirmed a Trinity of three Persons.

Despite these two mid-fourth century anti-Arian councils the scourge of Arianism persisted. In 359 two more councils occurred, however, each leaned toward Arian (or, actually, Semi-Arian) precepts; the Council of Ariminum (or Council of Rimini) and the Council of Seleucia. Then in 360 Emperor Constantius proposed a new “creed,” he claimed that the Nicene Creed was too complex and suggested the construction of a new, and decidedly pro-Arian, creed.

Soon thereafter, Emperor Theodosius I (379-395) battled Arianism by commanding concord between Rome’s Bishop Damasus and Alexandria’s Bishop Peter – an endeavor that was furthered when Theodosius issued the 380 Cunctos Populos Edict, this required adherence to apostolic teaching and a coessential Trinity of Father, Son, and Holy Spirit, and by adopting the Nicene Creed.

In regards to the Nicene Creed, the 381 Council of Constantinople (the Second Ecumenical Council), that was called by Theodosius, reissued the Nicene Creed and effectively ended Arianism; the Neo-Nicene Faith (expounded by the Nicene Creed as well as by St. Athanasius, St. Gregory the Theologian [or St. Gregory of Nazianzus], and St. Gregory of Nyssa) was declared to be the only permissible faith. St. Athanasius (c. 296-c. 373) was the Bishop of Alexandria from 326-373 (despite having been exiled several times during his reign) and in 340 he penned Three Orations Against the Arians and in 357 wrote his Apology Against the Arians. St. Gregory of Nyssa (330-395) was the venerable St. Basil the Great’s brother and the Bishop of Nyssa from 371-395 (the Arians deposed him in 376 and he was reinstated in 378). St. Gregory the Theologian (329-391) was a bishop in Cappadocia and, along with St. Basil the Great and St. John Chrysostom, was one of the three Church Hierarchs – he became the Patriarch of Constantinople in 378. In concert, these three giants of the Holy Eastern Orthodox Church helped to extinguish the Arian plague.

Watchfulness is… when free from mental images, it is the guarding of the intellect… [and] one who fails to pursue watchfulness… cannot free himself from evil thoughts, words, and actions, and because of these thoughts and actions he will not be able freely to pass the lands of hell when he dies.