Anthony has authored several pamphlets, descriptions of each follow, and would like to offer one free with every book choice. Obtaining multiple copies for distribution may be arranged (see the Various Offerings page for more information).

Based on material adapted from Graham Speake’s Mount Athos: Renewal in Paradise (Yale Univerity Press, 2002; please see the links for the Friends of Mount Athos website) as well as Anthony’s own exhaustive research. This forty-six page treatise (on 8.5″x11″ paper) attends to the rich history of Mount Athos – the Holy Mountain, or Agion Oros, described by Archimandrite Ephraim (Abbot of Vatopedi Monastery; on Mount Athos, Greece) as, “The Holy Mountain is the par excellence for living out the Gospel. It is the place of the experience of God, of the communion of the created and the Uncreated, of unceasing joy” – a coverage that includes the founding of Agion Oros’ monasteries and many of Mount Athos’ “typikons” (charters for both the Holy Mountain and some of its monasteries). Also, information on each of the twenty monasteries along with various other locales (e.g., sketes [dwellings that are gathered around a central church and which are dependent on a parent monastery], small “townships,” etc.) is presented. Several drawings assist in gaining a more complete comprehension of this holy Greek peninsula… known as “the Garden of the Mother of God.” 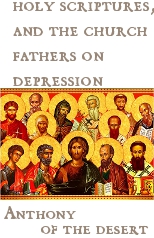 Holy Scriptures and the Church Fathers on Depression

In this day and age of so many “disorders” (i.e. depression, attention deficit disorder, bi-polar, etc.) it becomes especially crucial to be equipped with a comprehensive knowledge on what the Church Fathers have taught and what Sacred Scripture reveals about depression. This work concentrates first on the body and soul, passions, and illness to grant an overview of terrain tilled by demons for tempting us toward despondency. Within this portrait the text specifically focuses on the passion of depression; the causation of, and the cure for, this malady are explored. With the treatments discussed the reader will be amply armed with powerful weaponry by which to defeat this most destructive demon. 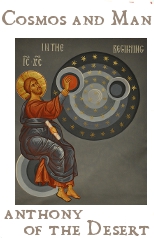 While some general knowledge about a Garden of Eden, and of Adam and Eve having existed and sinned therein, is posessed by the general public, actual conditions before the Fall, after the Fall, and in the age to come remain as mere vague notions. Cosmos and Man remedies this deficiency by opening with a discussion on the birth of creation and the making of humankind by God, both having been given existence in a state of incorruption, before moving on to diagram the union between humans and creation. Thus, once man sinned and fell into corrupton the cosmos also suffered the same fate. The Fall and attendant myriad of infections has been examined in the pages of this publication and conversation then turns to the salvation made possible by the Lord Jesus Christ’s death on the Cross and His Resurrection… which leads to an investigation on the return to incorruption by both humans and creation upon Christ’s Second Coming. Material has been excerpted from the Orthodox Word (please see the links page to visit the Saint Herman of Alaska Brotherhood) and the text is in its entirety based strictly on Church Father writings (a “Works Consulted” compilation provides grist for further research). 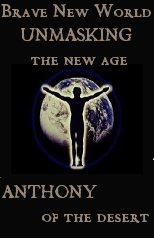 This condensed booklet, with material extracted from the Orthodox Word (cf. Saint Herman of Alaska Brotherhood), describes the dangers of science fiction (Star Trek, et al.), the New Age (Harry Potter, etc.), and fantasy. The ties between these and the occult has been traced, as has the frightening adaptation by many Protestant churches of  New Age precepts. Given the growing attitude that these evils are merely innocuous entertainment makes Brave New World a must read.

The one who flees from beneficial temptations flees from eternal life.