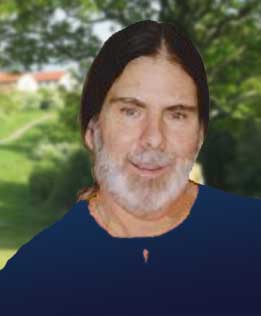 Writing under the name of Anthony (or Anthony of the Desert), Frank Jarvis Atwood was born in the mid 1950’s in an upscale neighborhood in Southern California, where he was raised in the Episcopal Church. He spent most of his junior high school years at the prestigious Brentwood Military Academy before tragically embarking on a regimen of drug involvement, countercultural activity and criminal enterprises. By his eighteenth birthday, Anthony was in state prison; in fact, more than 9 of the next 11 years found Anthony in various California prisons… where he continued illegal activity and became adept in occult studies.

While constructing a multi-state drug ring in the summer of 1984, Anthony was travelling from Los Angeles to Austin, Texas, and spent a weekend in Tucson, AZ. Just outside of Austin, Anthony was arrested by the FBI for a kidnap and murder about which he knew nothing. Nevertheless Anthony was convicted and sentenced to death; he remains on condemned row in Arizona.

While on death row, Anthony has remained extraordinarily busy. Upon his arrival he immediately engaged in a rigorous docket of university courses (Prior to this his educational experiences had ceased in 1975 when he obtained the high school equivalent GED) and hoped to ultimately earn a law degree. For a decade, Anthony attended university via correspondence courses, receiving an Associates of Arts degree from Central Arizona College in 1990; a second Associates of Arts degree from Ohio University in 1991; a Bachelors degree (majoring in English and minoring in Law) from Ohio University in 1995; and a Masters degree in Literature from Ohio University in 1998. Anthony has recently begun a three year theology degree program at a major Orthodox Christian school and hopes to continue thereafter towards a Masters degree in theology.

In addition to educational pursuits, Anthony involved himself in editorial work and became an author. Also available from his website (Please click on the appropriate links.) are Anthony’s four pamphlets – Mount Athos, Depression, Cosmos and Man, and Brave New World – and three of his published books: West of Jesus, Spiritual Alchemy, and The Gates of Hades Prevaileth Not.

When he had initially rekindled his interest in Christianity, Anthony became an editor for the Christian magazines, Rising Son and Overcomer, both of which published articles written by Anthony. The Rising Son published Reliance on Christ, while the Overcomer printed The Pride of Man, A Life in Christ, and Divine Union. As a means of helping wayward teens, Anthony also wrote for two youth groups: Gary Horton Ministries and Rick Hughes Ministries, both of which are located in southeastern USA. Both have published Anthony’s pamphlets: Christianity and Salvation, Entrance vs Inheritance, and Christian Death. A prolific writer, Anthony has also written a book and numerous articles on capital punishment and prisoners’ rights.

Currently, Anthony and his wife’s autobiography, And the Two Shall Become One, is being readied for release by the publisher. Anthony met his wife in 1987. Married in 1991, it was she who inspired his return to Christianity, a determination that included involvement in non-denominational Protestantism for a decade. This involvement however, left both with a sense of spiritual vacancy. Attempting to fill this interior void, Anthony wrote to a Greek Orthodox bishop in Cyprus. Soon thereafter, Anthony converted to Orthodox Christianity and was baptized in 2000 by his spiritual father, Archimandrite Paisios, the Abbot of Saint Anthony’s Greek Orthodox Monastery in Florence, AZ. It was on that blessed occasion that the name Anthony was given. The self-added “of the Desert” may, at first glance, seem to be indicative of life in the Arizona (Sonoran) desert and/or an existence in the “desert” of death row; however, Anthony’s intent revolves around the desire to remain mindful of the desert of sin, in which he lives and battles.

Anthony’s wife was baptized in the Orthodox Christian Church in 2007.

For if someone does not watch his mind attentively, he will find that, after he has cut down the passions, the images of past fantasies begin to emerge again like young shoots.